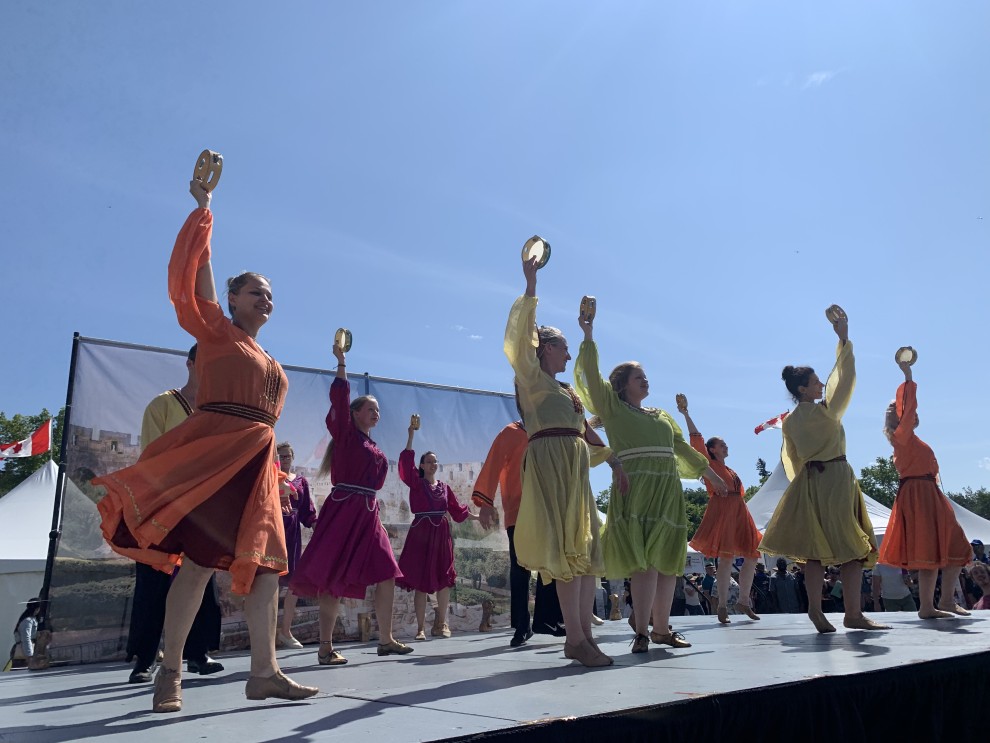 The Israeli Pavilion at the Heritage Festival needed a new committee chair in 2010. Christina Reboh was sitting at a Jewish Federation of Edmonton board meeting when she heard this news.

She noticed that no one else was stepping forward to volunteer and decided she would offer to do it without knowing what was involved. She only had been to the festival once.

Christina threw herself into the project, recruited a committee who put their creative minds to work, and started designing and building a pavilion from scratch. “We had a vision of creating a tour through Israel from ancient modern times, and the tunnels in Jerusalem, which I’ve never been, inspired us,” says Christina.

They spent hours transforming Styrofoam into stone walls by blowtorching and painting them. The volunteers devised a way to create a real waterfall for the pavilion. All the work had to be moved and installed in the pavilion once the festival kicked off. The revamped pavilion was very well received.

Over the years, Christina and the committee learned they had to create a more durable set that would be easily set up. “The first year was quite labour intensive, not just for creating the pavilion but for recruiting volunteers to man the pavilion,” she says.

One volunteer who was essential for Christina for many years was Amir Taller z”l. “His passion for and knowledge of Israel shined as he gave tours through the culture tent. He would have 15-20 people following him as he went through each section of the tent, summarizing and highlighting key points and answering questions. It was incredible and powerful to watch. He came back every year as our tour guide and became an important voice and member of the committee. His perspective and ideas helped develop several areas of the tent, most notably, a feature on the Bahai community in Israel. It was Amir who helped us expand and more thoroughly represent the diverse and beautiful peoples of Israel,” says Christina.

One of the most popular features of the pavilion was a replica of the Western Wall where people could write notes and place them inside the wall’s crevasses. The committee changes the pavilion each year to bring an additional element for visitors such as a Jewish history in Canada or a wedding dress.
“We want to recreate the experience of what it is like in Israel for Edmontonians because many people won’t visit Israel. This is their exposure. This is their trip to Israel because not everyone will go and we don’t want to rely on media to show them what the heart of Israel is,” says Christina.

The pandemic prevented many from seeing the pavilion in the last two years. As a result, there aren’t many changes to the displays for this year’s event in order to give people a chance to see it. There still are many volunteer hours planning and executing the event each year. Volunteers dedicate an average of over 2,200 hours annually.

Christina is always looking for new volunteers to help with different aspects of the pavilion. It’s up to individuals how much time they want to commit. They could help with designing the displays, take a shift during the festival, or set up and tear down the pavilion. “It is imperative that new perspectives and ideas are involved in the pavilion because I’ve only been to Israel once and the rest is all research based. Someone who is native to Israel can share a different perspective. It’s important to show how Israel is continuing to grow and develop as a country. We need the new ideas to present that,” she says.

If you are interested in volunteering at the Israeli Pavillion at Heritage Festival, please email info@edjfed.org.