The Golden Age Club was organized under the auspices of the National Council of Jewish Women. Rae Miller founded the Edmonton section, which originally met at the Beth Shalom Synagogue. Operating funds came from membership fees, annual donations by the NCJW Economy Shop and the annual Angel’s Ball. By 1970, the group ceased being an exclusively NCJW project and became the Jewish Senior’s Drop-in Centre, under the presidency of Hy Baltzan. At that time, the group purchased an apartment building located at 10052 – 117 Street. It used the basement for meetings, and rented out the apartments on top for revenue. Jewish Family Services became involved, eventually sponsoring programs for new immigrants. For a time, the centre was also a beneficiary of Edmonton United Jewish Appeal. In 1992, a grant was obtained from the Provincial Community Facilities Enhancement Fund, and that, together with private funding, allowed the demolition of the old building and the construction of a new one on the same site. The newly-named Jewish Drop-in Centre, under the presidency of Alice Abells, opened its doors on May 16, 1993. The centre provides programming for seniors including adult education, holiday and birthday celebrations, excursions, bridge, Mah Jongg and Bingo, and Mameloshen (Yiddish) Club. The centre provides support, recreation, adult education, programs for Russian and Yiddish speakers, lunches and more! 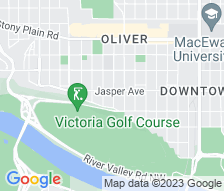