The Jewish Community of Edmonton was formally organized in 1906 when a meeting was held at the Boyaner Home. The first action taken by the committee was to hire Hyman Goldstick as rabbi. The growth of Edmonton Jewish Community continued with the opening of the orthodox Beth Israel Synagogue in the fall of 1912, at the corner of modern day 95 Street and 101 Avenue and was the first synagogue built in Edmonton. Prior to its construction, the Edmonton Jewish community had been holding religious services in a variety of locales, including private residences. In 1952, Beth Israel Synagogue moved to a new, larger site on 119 Street and 102 Avenue. In 1984, plans were made to move the congregation even farther west to the corner of 170 Street and 69 Avenue. The new building at this site was completed in 1999. Members of the congregation have been active in almost every Jewish organization in Edmonton. The synagogue also operates a women’s auxiliary for female members of the congregation called the Beth Israel Sisterhood, which fundraises for the synagogue. Notable rabbis include Rabbi A. Pinsky (rabbi at Beth Israel from 1912 – 1933), Rabbi A. Postone (1940-1968) and Rabbi Daniel Friedman (2002-2018). The current rabbi is Zolly Claman. 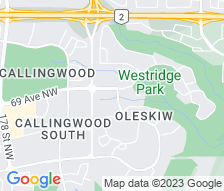