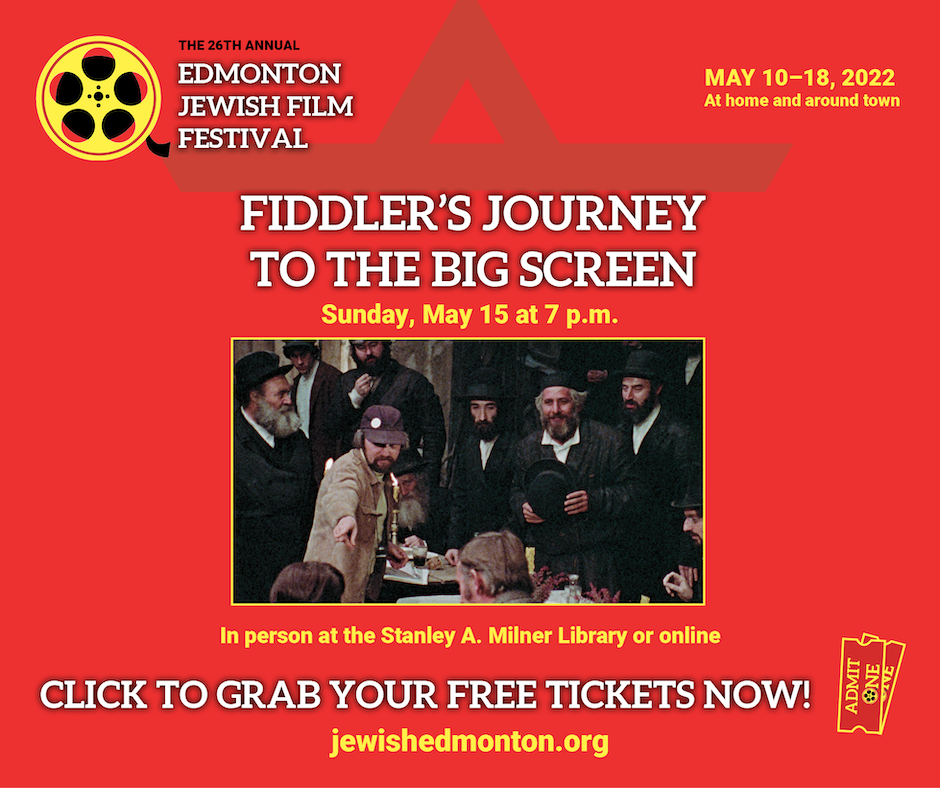 An in-person event for Fiddler's Journey to the Big Screen and Space Torah at the Stanley A, Milner Library at 7 p.m.

If you love Fiddler on the Roof, you will love this documentary about the film! This free in-person screening is part of the Edmonton Jewish Film Festival and includes a screening of Space Torah. The screening is sponsored by Servus Credit Union. These films can also be viewed online for free as part of the festival.

Plot: The fall of 2021 marked the 50th anniversary of Fiddler on the Roof, the film Pauline Kael (The New Yorker) called "the most powerful movie musical ever made." Narrated by Jeff Goldblum, Fiddler's Journey to the Big Screen captures the humor and drama of director Norman Jewison's quest to recreate the lost world of Jewish life in Tsarist Russia and re-envision the beloved stage hit as a wide-screen epic. Oscar-nominated filmmaker Daniel Raim puts us in the director's chair and in Jewison's heart and mind, drawing on behind-the-scenes footage and never-before-seen stills as well as original interviews with Jewison, Topol (Tevye), composer John Williams, production designer Robert F. Boyle, film critic Kenneth Turan, lyricist Sheldon Harnick, and actresses Rosalind Harris, Michele Marsh, and Neva Small (Tevye’s daughters). The film explores how the experience of making Fiddler deepened Jewison as an artist and revived his soul.

About Space Torah: Dr. Jeff Hoffman became a NASA Astronaut in 1978. He participated in five space missions, becoming the first astronaut to log 1,000 hours of flights aboard the space shuttle. Dr. Hoffman has performed four spacewalks, including the first unplanned, contingency spacewalk in NASA’s history and the initial repair/ rescue mission for the Hubble Space Telescope. He was the first Jewish American male astronaut to fly into space. Over five space missions, he chose to bring numerous Jewish objects, the highlight was a small and light Torah scroll that he took with him on his fifth and last mission. Rabbi Shaul Osadchey, Jeff’s spiritual leader, was instrumental in making it possible for Jeff to take a Torah scroll (the Space Torah) into space. Jeff saw the act of bringing religious objects into space as part of bringing his own tradition with him, but bringing the Torah into space had the added symbolic meaning and significance of bringing the holiness of human life into space. Made by Verissima Productions.